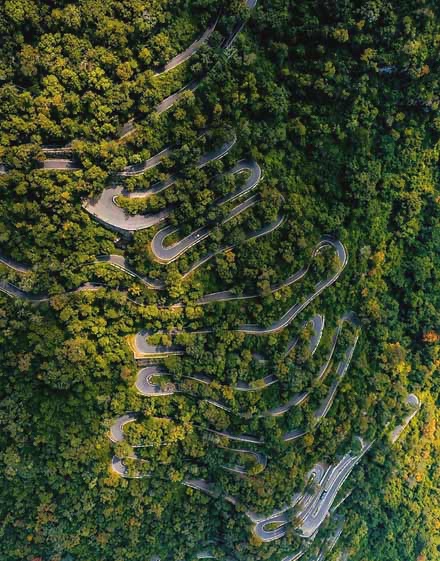 As we learnt our lesson from our trip to jawadhu hills and obviously this time we planned for overnight stay before the ride to kolli hills.. This was also a rehearsal for our upcoming 300 BRM to kolli hills. This time we are seven members and we transported our cycles by train. We are to catch up Friday evening train and so we left our cycles packed in the luggage department.

We boarded the train in the evening and reached Namakkal railway station. There we unloaded the cycles and came to know that the booking office at the station has been permanently closed and we cannot load our cycles while return. With this information we went to the lodge and got ready for the days adventure.

It was drizzling in the morning and it rained while we commenced our ride. We rode 20 kms and reached the base of kolli hills. We had a great breakfast before the ride and each of us started at our own pace.

Kolli hills has got an imposing 70 hair pin bends. The overall average gradient is only 5.3%. After reaching half way the visibility became dimmer and dimmer.  I climbed the 70 hairpin bends in about an hour and half. We were taking pics till everyone reached and then we descended downwards.

We had lunch at the same place where we had our breakfast and proceeded towards salem. It was a daunting ride in hot sun. We reached around 6:00 pm in the evening and caught up the train.

We were of the view that kolli hills ride is easy as we had assumed that the highest point in the hill is at 70th hair pin bend which was not true and we learned the hard way in the Trichy 300 BRM.

The BRM was organised by Trichy randonneurs(TR) and till date this was one of the best rides I have ever participated. The route map was provided and we were super confident as we had already made it to the kolli hills practice ride earlier.

We booked the train tickets and loaded our cycles in the luggage compartment and reached srirangam via a short ride from Trichy. We stayed at srirangam yatri nivas and the starting point also happened to be the same. We had dinner in the evening and had a good sleep.

Everyone was there at the start point by 5:30 am in the morning. More than 50 riders have assembled there and it was like a festive mood. The ride started sharp at 6:00 am in the morning and breakfast was Provided by TR at 55th km at the first CP. We had idly, vadai and Pongal with sambar and chutney. Then a quick start and we are at 100th km. Prashant sir was waiting there before the start of the climb. Everyone had juice and filled up their water bottles at the local shop near the arch.

The climb up hill

From the image you can see how many hairpin bends could be. A total of 70 hairpin bend in a stretch of 20km to reach the top. From my previous experience I know it is going to take an hour and half to reach the top. Naazia had started climbing alone and followed by Lakshman sir. I was riding at my own pace somehow it was not my best. My best came during the practice session last month. At 35th hairpin bend volunteers were providing with refreshments. Halted for a few minutes and ate a brownie prepared by pradeepa mam. During the practice climb weather was awesome but during the event, It was very sultry. The joy on seeing Prashant sir after reaching the top expessed everything. But the worst challenging part is yet to come which everyone is unaware.

Prashant sir just showed a direction and asked us to have lunch there. It was one of the steepest climb. Little did we know that the place where we are having lunch is the highest point in kolli hills. Since there are no hotels available, lunch had been arranged in contract with a local caterer. By the time lunch arrived, six of us were at the spot. All of us were lamenting about the unnecessary climb which Prashant sir tricked us and made to climb. We had tamarind rice and potatoes for our lunch and filled up our water bottles and resumed the journey.

As everyone is of the assumption that the climb is over, little did we know that only fifty percent of the climb is completed. We misinterpreted the elevation graph. There were many descends and ascends enroute and had difficulty in navigation to. There is an elevation profile in the bike computer which should be used in conjunction with the map to identify which way to go instead of navigating physically and finding the route to be wrong. The next check point is at karavallikombai, Kolli hills Tribal Cooperative Society. We reached the CP on time and took selfies and resumed the ride.

We rode across Jack fruit plantations and the views were very scenic. We could not halt to take our pics as we were right on time. There was no dog chase and There were monkeys occasionally crossing the road and the chirping sound of birds. As we started to descend, there was a puncture at rear tyre. We replaced a tube and started our journey. By now Shreyas has left us and gomathi shankar sir was passing by.

We halted for a coffee break and naazia was insisting that my tyre pressure is low and I was ok with the tyre pressure. As I did not pay heed to her words, She requested gomathi shankar to fill air in my tube. While he was trying to increase the pressure, my tyre and tube got bursted. We had a terrific laughter therapy while replacing with a new tyre and tube. Within 10 kms I had to fix another puncture and everyone behind us overtook one by one. Once we fixed we reached the next CP, took selfie and located a place for dinner. We still had to complete another 92 km in 5.5 hours.

I started feeling sleepy and my pace was going down. Had many coffee breaks wherever possible and kept the momentum going as another puncture or any other mechanical failure will hamper our chances of completion severely. Now we have to pass through many villages and face numerous dog chases. We reached the finish point fifteen minutes before cut-off.

Lesson learnt from this ride

The next day morning we were provided with a small momento and departed from srirangam to Chennai. Overall it was a great ride experience.

Most of us who practice the climb at kolli hills must not stop at 70th hairpin bend. We must ride till the highest point in kolli hill which has more steep climbs enroute.

See you in another ride.