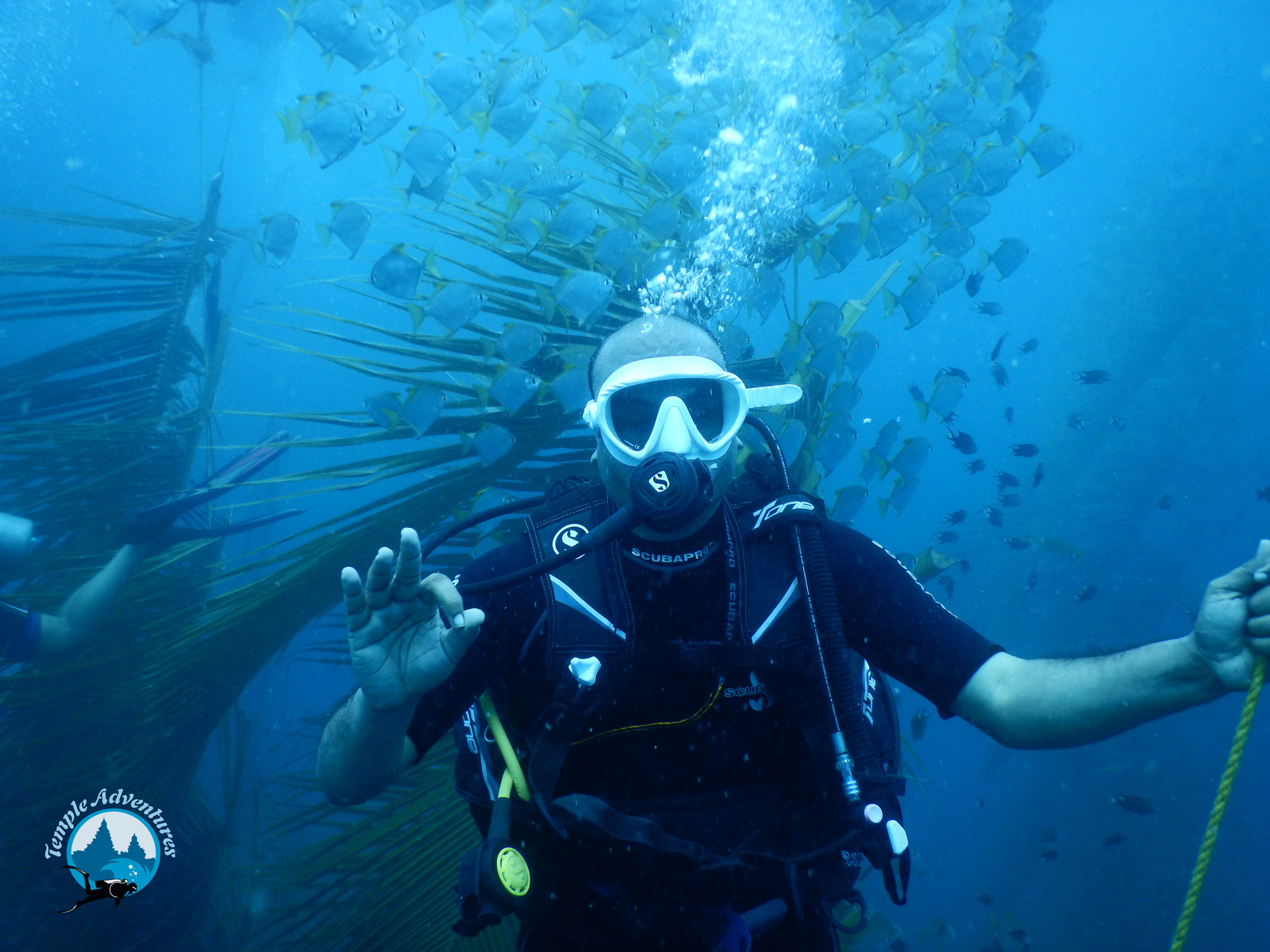 Every since i dived for the first time in netrani islands, i am in love with the deep oceans. This pongal day i decided to dive in the east coast of india. I got to know of the agency which is organising the trip- temple adventures.  Temple adventures is located very near to the pondicherry railway station and the government guest house.

We started from chennai early in the morning by bus and reached pondicherry by around 11:00 am in the morning. We roamed around and could not get a decent room. We settled for a mediocre room just near the bus stand with the help of an auto driver. We put our luggae there and reached ‘Temple adventure’. They asked us to go and have lunch nearby. We had our lunch and joined them again for the pool sessions.

On reaching the spot, we were given forms to fill in for our next day dive and shown some videos of dive site. Then we were taken inside a tank for our trial sessions, where we were trained for basic skills like breathing under water, removing water from scuba mask, equalising, hand signals etc., All of us did it with ease except the last batch who were doing at 4:00 pm in the evening. By the time water has become so cold, all of them started shivering including the trainer.

After pool sessions are over we returned to the room and then located this hotel using ‘Tripadvisor’ app. soon we were there. I ate to my satisfaction on saturday night at Hotel ‘Le club’. The hotel is situated near rock beach. You can either have your dinner and then go for a walk or vive versa. But the plus side of doing the former is you get yours seats early otherwise you will be sent back. There are lot of places nearby but thus one is a must if you are in pondicherry. Indian, continental, french cuisines are available here and they serve really fast. With the wine and spirits, and the wild breeze of the rock beach, make your mood light.

As the name indicates, the sea was stopped by placing rocks along the coast. The beach is very clean and long and it is really nice time, be it with family or friends. It can be easily reached from the bus stand as well as the railway station.

On the day of the diving, we got up ealry in the morning and reached the office at 6:30 am in the morning. Breakfast was arranged by them, but we had lightly. It rained early in the morning and The weather was little rough. We had difficulty in plunging into the ocean. Once inside the ocean, It was very calm, even at a depth of 1 metre.

Temple reef is an artificial site, created by this team for discover scuba divers. There are twenty other dive sites in this area.

The artificial reef is made up of cocunut tree leaves, palm tree leaves, and many other recyclable materials only. Lot of fishes swarm the area and for begineers it is an aweful sight. For an experienced like me, it was not so awful. We should try for other real dive sites nearby. sine i went along with two little cousins, i choose to go for this site, which is really safe for freshers.

The open water course was conducted for a batch of students at this site.

I tried to take my camera(olympus TG-3), but felt uncomfortable with having  camera in one hand and leaving the control to my diver. Several times my instinct took over and i paddled with my fins and created discomfort for my co-diver.

After the dive i felt that i should not have gone for DSD. I should complete my open water course soon and go independently. I was very comforable inside water and the only discomfort had was somebody handling me. I need my freedom. I have decided to do the open water course, but still not decided where should i do the course.

Lion fish- during my dive at temple reef.

Credit for all photos goes to the temple adventures team.

As soon as we finished our diving, we felt very hungry and reached this hotel. The hotel is 1/2 a kilometre from the bus stand. As we stayed very near to the hotel in a cheap guest house, we launched into it. Food is served in both Buffet system or by order. We saw the variety and choose the buffet. Traditional tamilnadu food in full splendour. Salad, soup, biriyani, fish fry, payasam ended our trip.

So now i have dived in the east and west coast of india. Next in line is the andaman islands situated in bay of bengal.

10 thoughts on “Diving in Temple reef, Pondicherry aka Puducherry”