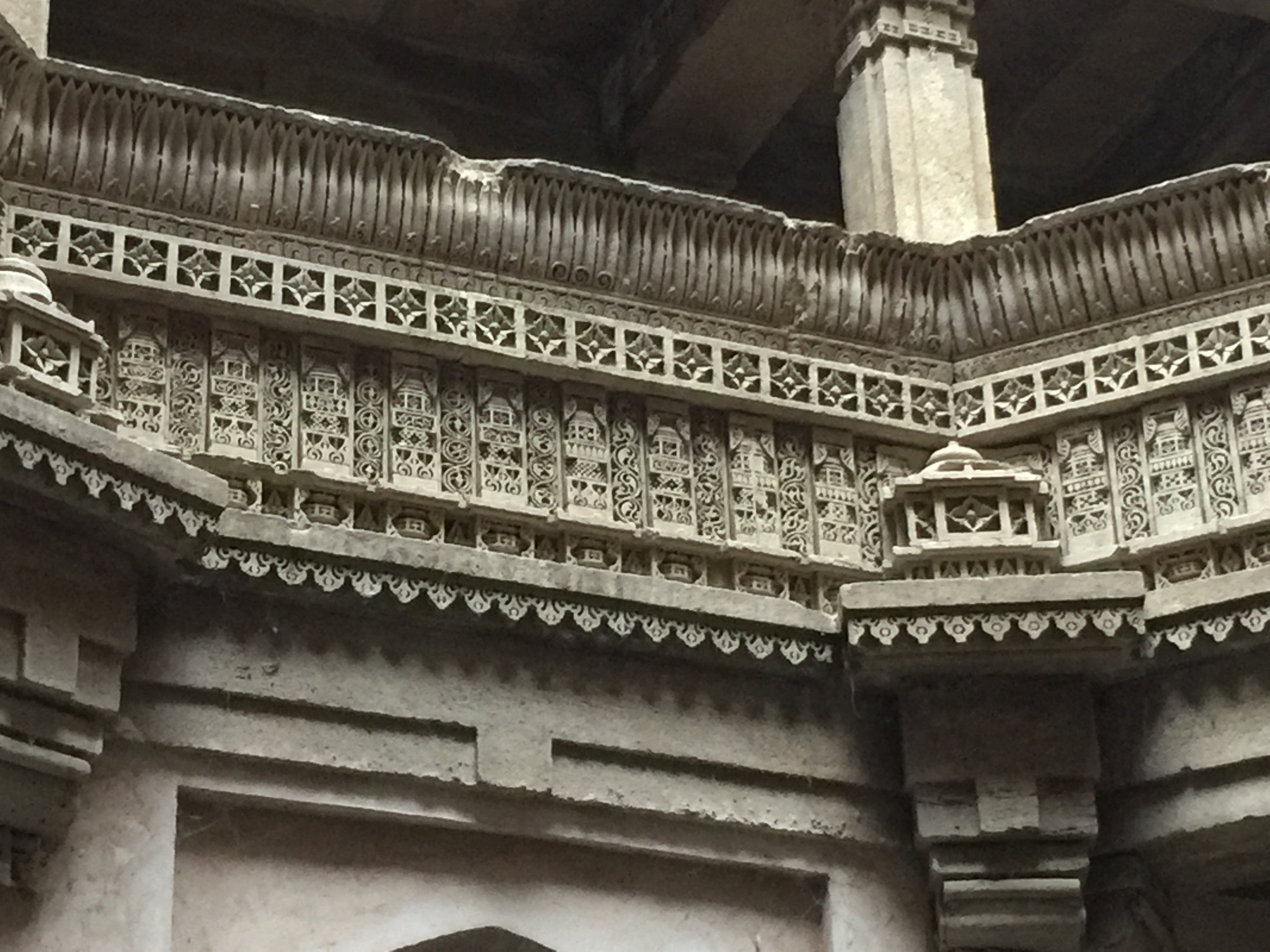 I had 3 hours to catch my flight. I asked an auto driver what can I see within this short span of time. He took me to adalaj. Till I reached the place I had no idea what it was. But after admiring the site, I definitely wanted to collect and share the information with fellow readers.

Adalaj is the name of the village situated approx. 18 km from Ahmedabad, just 10 km from the airport. A very nice place for photography. The stepped well in the villages is also called by the same name.

As per legend the 15th century, Rana Veer Singh of the Vaghela dynasty, a Hindu ruler, reigned over this territory known at that time as Dandai Desh. His kingdom was a small one. It was subject to water shortage and was highly dependent on the rains. To alleviate the misery of his people, the Rana began the construction of a large and deep stepwell.

Before this project could be completed, his kingdom was attacked by Mohammed Begda, the Muslim ruler of a neighbouring kingdom. The Rana king was killed in battle and his territory was occupied by the invader. Rana Veer Singh’s widow, a beautiful lady known as Rani Roopba (or Roodabai), wanted to perform sati and join her husband in the afterlife. However, Begada prevented her from giving up her own life and proposed marriage with the dowager.

She agreed to a marriage proposal on the condition that he would first complete the building of the stepwell. The Muslim king who was deeply enamoured of the queen’s beauty agreed to the proposal and built the well in record time. Once the well was completed, Begda reminded the queen of her promise to marry him. instead the queen who had achieved her objective of completing the stepwell started by her husband, decided to end her life. She circum-ambulated the stepwell with prayers and jumped into the well, ending the saga of building the well in tragedy.

One version which is narrated in the 200 years old scriptures of Swaminarayan sect suggests that before she died, Rani Roopba requested religious saints to take bath in this stepwell so that the water in the stepwell gets purified by these saints thereby delivering her from her sins.

Another is linked to the tombs found near the well. The tombs of six masons who built the well are seen near the Vav. Begda asked the Masons if they could build another similar well and when they agreed Begda sentenced them to death instead. Begda was so impressed by the architectural excellence of the stepwell that he did not want a replica to be built.

The step well can be considered to originate from the need to ensure water during the period of drought, and in the deep relationship of faith in the Water God as conspicuous even in the Vedas of around 1000 BC. If we retrospect further, its genesis may be pursued to the Indus civilization of around 2500BC.As is seen in the remains of Lothal or Dholavira (meaning white well), this civilization spread to Gujarat etc in India, not remaining contained within the present territory of Pakistan. To understand the step well, adding to the environmental conditions, considering it within the cultural tradition of a religious belief towards water is necessary. When touring the sites in actuality, many of the step wells were built on land under Islam. Even under subjugation, the tradition of step well building of Hindu origin continued. Adalaj is a little village near Ahmedabad, the center of the state of Gujarat. Formally, the well here is named Ruda Vav, after its owner, a Hindu queen. It was constructed in the beginning of the 16th century. The most numerous of step wells are simply rectilinear in plan. Within them, the step well at Adalaj has a cruciform plan. Steps from the east, south and west lead down to meet at the landing, from where the form faces northwards towards the well, steps leading further down to it. The overlap of the cruciform is the landing, a square, but stone beams stretching at 45 across its four corners cuts the sky out in an octagon. The building material of sandstone is bestowed with dense ornament. Having descended the steps from the south, one crosses the axis formed by the steps descending from the east and the west, and continues downwards. Likewise, one descending stairs in the east turns right and one coming down from steps in the west turns left. Eventually, whichever stairs one climbs down from, man becomes conscious of all the four basic directions at the ground level and continues to physically experience them as he arrives at the bottom of the earth. Already the spatial experience begins to comprehend the world above the ground and that below it, binding them together with a cosmological meaning. Climbing down facing the well in the interior, a continuous change of scene unfolds. Curbing the inward fall of the walls on both sides are beams stretching across, supported by columns standing between the steps. In the passage space they create a three-dimensional lattice, with the stone floor slabs running across and interrupting light. They create a rhythm of light and shade. Each step of the stairs climbing down strikes the rhythm of walking. This transmits through the entire underground, and along with the rhythm of light and shade, reverberates and spreads. Upon arrival at the bottom, a square stepped floor descends like a funnel to the bottom-most plane, which is cut out into a circular well. Column and beam, wall and arched openings wind around the square stepped floor, forming a backdrop. The upper part of the well is a vertical space open to the sky. At the four corners of the square are stone beams stretching at 45 , forming an octagonal cut out tubular space. This framed construction continues across four strata, from top to bottom. At the apex of the octagon are large column heads, which mediate between two adjacent surfaces to form a third surface. Looking up from the bottom of the ground to the level above ground, at the topmost strata of this deep vertical space, is visible the column heads, including which form a 16-sided polygon that is visually close to a circle. Due to this circle, within the gloom the azure blue sky is cut out with lucidity, a white cloud floating across once in a while. Here is the axis binding the underground and the sky, taking upon itself the meaning of a cosmic axis. Water lying dormant inside the earth, the Earth and water become one, and from here stretches the axis to the sky to build a cosmology of the universe.

Hope the information is useful.

One thought on “Adalaj – A stepped well”